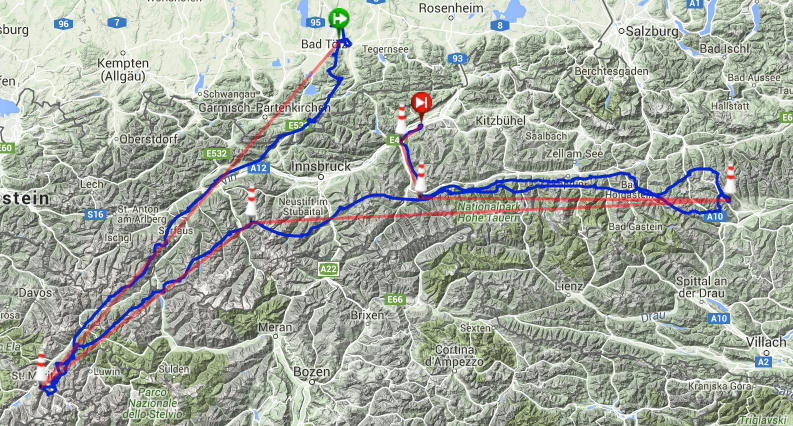 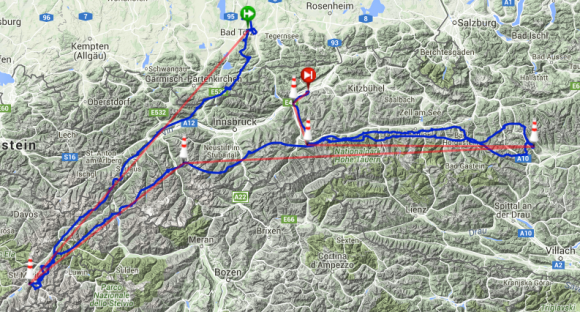 Let me have a look. When was it? Oh my, it could be some years, let me browse my log book.

Hmm.
Nice flight this one. But no, that’s another story.
I was with the Discus 2c in 18-Meter-configuration.
Oh yeah, this was another nice flight, but still not the one I’m looking for.

Shortly before the sun went down the Inn valley shone golden. I had a shower some minutes earlier, enjoyed a Weißbier and my first „Schlutzkrapfen“, a Tyrollean specialty. I had a good book with me and still some hours until my buddies would arrive to bring me and my glider home.
What a day.

It started early, as every Saturday would start at our gliding field. We met at 9:00 in front of the hangar to allot the club gliders. I was the only one who wanted the „Two Charlie“, our 18-Meter Discus 2c. My goal was to try my first declared task, a 600-km-triangle. I programmed the flight computer with the turn points, I packed all the stuff I needed in the gaps and niches of the tight cockpit: water before all, survival kit, food, oxygen dispenser, spare clothing, flight maps. Parachute, the lamb fur I use as a cushion, sun glasses, spare sun glasses, plastic bags (to urinate into), stupid gliding hat and what not. Batteries, log book, license, the works. And another first: 150 liters water into the wings as ballast, another 10 liters into the tail to get the balance right, otherwise the glider would be hopelessly nose heavy and would feel like a log to fly.
I was even rather early to bring my plane to the launch line-up. There were maybe ten gliders before me waiting to get a tow plane. With six tow planes that should take half an hour or so to get us all airborne.
Problem was: there weren’t six tow planes. There were two. And every glider pilot wanted a „high-and-out“ launch, which meant it took 20 minutes between launches. And every third launch or so the tow plane would have to refuel. Which took another 15 minutes. Oh boy.
I intended to have a lift off at around 10:00.
At 11:00 there was only one glider before me. Tow plane number 1 came back and the pilot declared he had to join his family for the rest of the day, thanks for the patience. Tow plane number 2 came back and declared serious problems with the cylinder temperature.
Of course. It was July and it became hot, maybe 28° Celsius already. Everything came to a stand still. Except we started to recruit tow planes and tow pilots.

The upside was that now the thermals all were very well developed and easy to find, I followed the standard route West to the High Engadin.
Normally we would fly such a task clockwise, meaning heading East first, with a turn point in the Austrian Alps, then heading for the second turn point in the Swiss Alps, preferably in the Bernina region near St. Moritz. That would ensure that our final glide could be done starting from a high elevation (~4.000 Meters) down to 600 Meters. That meant a final glide of some odd 100 km.
But the weather forecast predicted a front coming from West in the afternoon, so we choose the counter clockwise trip. Engadin first, Austria later. That was always somewhat tricky, since instead of a long final glide we had to climb several mountain passes, coming from lower terrain.
But it went well, I was pretty fast until I reached my first turn point. I did this for the first time and I effing didn’t understand what the flight computer was telling me. Obviously I couldn’t train that before because this machine had no simulation mode. I lost time. And then altitude. Something was seriously wrong with the wind. Where there should have been wonderful thermals I only found eddies and turbulence.
And then I realized: the Maloja-Wind didn’t blow. The Maloja blows regularly from South to North, allowing ridge running at the exposed ridges. But today there was a Northerly wind, an odd thing, that happens twice a year maybe. So I gained altitude at a northerly ridge, 2 Meters a second, while it was raining around me and there was a really dark cloud above me. I lost another half hour in this corner.

The second leg went fast and nice, a walk in the park, but I knew I was seriously behind my schedule. And the weather where my second turn point was waiting for me didn’t look promising at all: blue and almost cloudless.

Near „Zell am See“, a famous Tyrollean mountain town I met my friend and club mate Benni Bachmaier in his Discus 2c in 15-Meter-configuration. We shared a thermal and it was like having a „cortado“ together. We were circling together and discussed my options. He was flying almost the same task but he launched two hours earlier which made all the difference. He gave me a fifty-fifty chance to complete the task. I asked him: „what would you do?“. A short silence on the radio, then he said: „I’d try. you never know what you can learn from it, even if you don’t succeed.“
Benni was 18 years old then.

Of course I had a try. I continued East, fumbled at the turn point again, poking in all this blueness to find a thermal, found one, lost it and gave up. The Western horizon was dark grey, I was in dead, stable, blue air. I would fly to „Zell am See“ airfield and wait for someone to bring me home. I set course and watched the scenery. The Tyrollean mountains North, glowing in the late afternoon sun. It was 19:00 local when I arrived at Zell. The Pinzgau valley in which Zell was sitting was totally shadowed by 8/8 clouds. I had 1.400 Meters MSL, Zell airport was on 800 MSL, so I still had some altitude to play with.
And then I noticed the most curious thing: there seemed to be sort of a ridge lift on the north facing slopes. I couldn’t imagine where that came from, it made no sense at all, but there it was. It sure was no thermal lift, there was no sun because of the clouds and even then, the north facing slopes don’t get any sun.

It was not much, half a Meter per second, a little more, a little less. I started to follow the slope, ever so slightly gaining some altitude in the process. I choose Zell as Go-To in my flight computer and decided to follow this lift West as long as a I would have a safe final glide to Zell. It was strangely relaxing. I was never so low in this valley, the lift was mellow yet steady and as I diverged from Zell I gained altitude, so my final glide stayed the same.
The radio went quiet a while ago , I was too low, the ridges and mountains shielded the UHF signal.
40 minutes later I had a tough decision to make: I was approaching Gerlos mountain pass. I still could make a 180 and return to Zell or I could slide ever so low over the pass and be nearer to home, even if I had to land out.

It was the lowest pass ever. The air was smooth and silky, I could see the faces of the hikers and bikers when I crossed the pass 50 or 60 Meters above ground. I wondered what they would think. It felt like a triumph! I cut the home-bringing tour short of more than 100 km!
At the Mayerhofen slopes, facing the famous Zillertal there was very little lift. In a way I had given up two hours ago so I couldn’t do the simple math that even a 0.3 m/sec lift would give me 600 Meters in half an hour. 400 Meters would have been a final glide. 600 Meters would have been a final glide with a safety margin.
But 30 minutes slope soaring on a shallow slope is wonderful with a RC plane but a tedious task with a glider. And as I said: I had given up two hours earlier.

So I headed North. Funny enough the mountains east of my course had sun and I hoped them to produce some thermals. What I didn’t realize that the northerly wind that produced this lift that brought me to this point also destroyed any thermals that could have developed. Besides: the local wind systems worked utterly different. But I would learn that before the next day, when Mathias explained it to me.
So I hit sink. Every hope faded to be able to cross the Inn valley to reach Achensee (Lake Achen) and shorten the distance to home even more. So I turned East into the Inn valley, hoping to be maybe able to reach at least Kufstein airport. I hit more sink and a head wind. And the ground of the Inn valley really came closer.

I still had 300 Meters or so, plenty of time to watch out for a nice meadow or a harvested field, possibly close to a road to make it easier for my friends. And then I saw the „Gasthof“ (country side hotel). A nice field in front, a beautiful terrace with nice parasols.
The diner guests had a view when I landed my glider right in front of them in a little dust cloud. Boy, was it warm down here!
I fetched my wallet, a clean shirt and a book and strolled to the Landgasthof St. Leonhard. I entered the terrace, sat at a table and within seconds a waiter in a „Dirndl“ took my order: „A Weißbier and Schlutzkrapfen please, and do you happen to have a shower somewhere?“
„Of course, please follow me!“
Life was good!

Epilog:
A day later (former Baron-Hilton-Cup-Champion) Mathias Schunk explained to me what I encountered the day before. The high mountains of the „back bone“ of the Alps had been heated so much that they started to pump enormous masses of air into the troposphere. That air had to be acquired somewhere and that was from the Northern low lands. So trillions of tons of air started to move south, a river of air – no, a small ocean of air flowed South and when it hit the slopes it couldn’t help but rise. Hence the lift I encountered.
Deep in the Inn valley there was another, local wind system working, that moved from East to West – hence the head wind shortly before my landing.
If I had known, I could have climbed 500 – 600 Meters at the Mayrhofen slope, turned North in the middle of the Zillertal (Ziller Valley), thus avoiding the cross winds from the Inn Valley, being able to jump over the Inn valley to Achensee. There I could have found another northerly slope to climb another 200 Meters and I would have had final glide.

And I would have forgotten the flight within weeks. I didn’t know and now I can tell the story in all its glory details as if it was yesterday.

Post scriptum: No need to try „Schlutzkrapfen“. Boring version of Ravioli in pure melted butter without the Parmesan. Go for the roast porc instead.

A flight with a culinary ending (flying low in Pinzgau valley)